Everything You Need to Know About a Power Surge

07 Nov Everything You Need to Know About a Power Surge

Everything You Need to Know About a Power Surge

You may be sitting at home and watching the TV when suddenly your lights flicker. Your TV shuts off without the use of a controller. You may even hear a popping sound. At the time, you may think nothing of it. Perhaps a tree branch touched a power line and momentarily interrupted the electric flow to your home. When you attempt to turn your TV back on, however, you suddenly that it refuses to work at all. You’ve become the victim of a robust power surge.

These incidents can occur at any time, though there are usually a few indicating factors that could result in a power surge. What may be the cause, what might happen to your electrical devices as a result, and how an electrician can help, this article will touch on the topics above and shed some light.

In some cases, a power surge can occur because of a spike is initiated when a high-power electrical device is activated. This electrical device could be your refrigerator, space heater, or even your air conditioner. By kicking on, the device sends a spark along the electrical current which is transferred to the rest of the plugged-in devices of your home.

When it comes to cause and effects of power surges, your electrician is likely always going to take a look at the state of your house’s wiring. Many power surges can occur because of faulty or inadequate wiring. Usually, a house is wired to protect itself against these spikes, but if the wires aren’t equipped with the proper devices or just incorrectly installed, 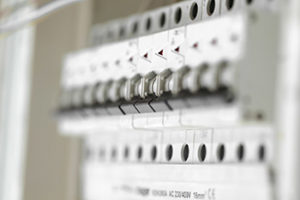 then that spike is headed right for your plugged-in devices.

Besides the wiring, tripped circuit breakers and short circuits within your wiring system is another factor that could result in a power surge. Because the circuit breaker is the neural network of how your wiring and the electric system works in your home, it’s paramount that you have an electrician take a look at it. They’re the only ones who understand the safety hazards of working with circuits and wiring and as such should be allowed to do their thing.

In addition to old and faulty wiring and circuits, a surge might occur because there are too many devices plugged into a circuit. This happens as well as power strips that have become increasingly popular. You should note that not all of the power strips come with surge protection. As a result, if you plug too many high-powered devices into that strip, a surge could occur, and all of the devices plugged into the strip could be damaged.

While it may seem somewhat contrary, surges can occur due to a power outage as well. Perhaps you’ve even noticed that when the power is back on, there’s a brief moment when your lights burn a bit brighter than they typically do. Typically, this is because there’s just a lot of excess power in the wiring. It regulates quite quickly before damage can place. However, there are cases where the surge is so powerful that it leads to a spike and damages your electronics.

Perhaps the most popular cause of power surges is lightning strikes. You may think that your house needs to be struck by lightning for the power surge to occur. That isn’t the case. While being struck by lightning will undoubtedly result in a power surge, the bolt can also hit quite a distance away, and you might still experience the consequences of a power surge. If the lightning hits or strikes close to a power line, that’s an electrical surge that is shooting down the power line right to your home. The power of this spike is enough to damage your TV, computer, router, gaming system, and practically any other beloved electron device that’s plugged into the wall.

You may wonder if power surges can be dangerous. To your electrical devices, they pose as quite the threat. Many electronics are not suited for a power surge. When a spike occurs, it travels to the device and essentially fries the delicate mechanisms within the device. Because spikes can happen at any time, your electronics are under threat of being severely damaged.

Besides posing a threat to your electronics, however, a power surge can also threaten your home. A powerful enough surge can start a fire in your home.

For those with young children who like to poke items inside of a wall outlet, the lethal consequences are quite clear. Even without a surge, the shock could seriously harm them. However, add-in a power surge, and there’s a tragedy on hand.

Be Safe And Hire An Electrician

If you notice that your house is repeatedly receiving power surges, you should call an electrician to protect your home. Doing so yourself is extremely dangerous and could lead to lethal consequences. By having an electrician perform the job for you, they can do so in a safe manner and inspect your house and its wiring and electrical system. With their experienced eye, they can detect the critical problems of your system and provide practical solutions to keep your home, electronics, and family safe. Act quickly, so you don’t lose any of your electronics to the next surge.